First published in The Boston Globe.

There aren’t many people who can claim they’ve run two of New England’s biggest public relations firms. Larry Weber can. He might be best known for the PR agency that bears his name, Weber Shandwick, which the Weston resident left more than 10 years ago. Now, he’s chief executive of Racepoint Global, which employs more than 200 people, including 125 at its office in Boston’s Financial District. Weber, 60, is the author of five nonfiction books, and making plans for his sixth. He spoke to Globe 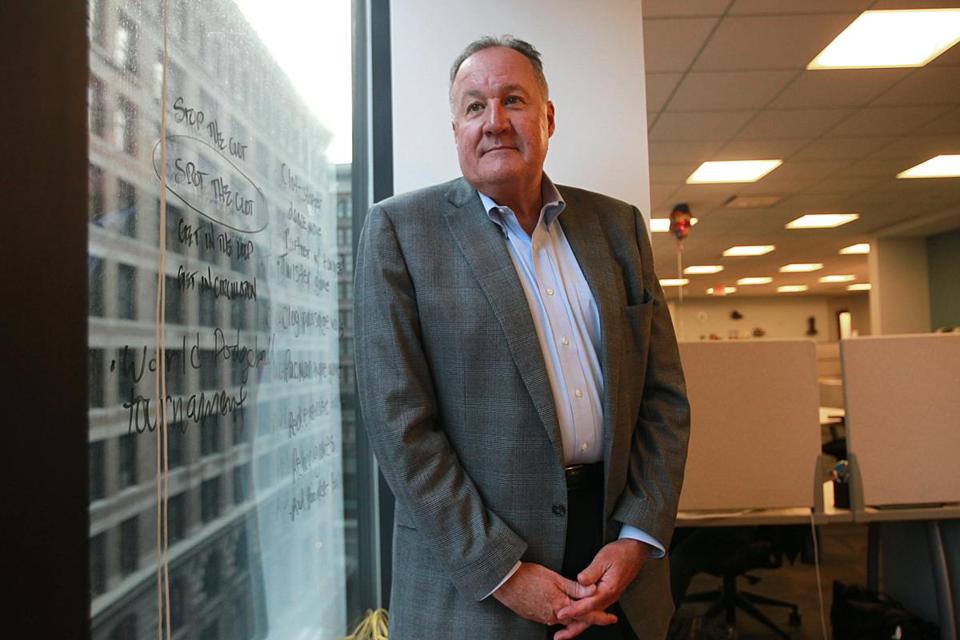 reporter Jon Chesto about that book, the various hats he’s worn over the years, and a big local merger that never came to be.

1 Weber built his first business with the help of Massachusetts’ technology miracle. He had developed an interest and expertise in tech PR while working for Ed Eskandarian at Humphrey Browning MacDougall, later known as HBM/Creamer. Weber went out on his own at age 31 in 1987 to launch the Weber Group. Some of his clients included Data General, Lotus Development, Digital Equipment Corp., and Wang Laboratories — tech giants that have vanished.

“I rented temporary space at 124 Mt. Auburn St., next to the Charles Hotel. I got an office and I started dialing for dollars. Ed Eskandarian was very good about it. By 1992, we were the largest technology PR firm in the world. A lot of it was the right time at the right place.”

2 Before Weber sold Weber Group to Interpublic Group in 1996, he considered merging it with Mullen, the ad agency then based in Wenham and led by Jim Mullen. Both agencies ended up under the Interpublic umbrella, along with Jack Connors’s ad agency, Hill Holliday.

“We were going to be Mullen Weber [but] we couldn’t get to the right value. My lawyers said, ‘Larry and his team are worth a lot more.’ Jimmy and I are still friends. He, of course, then got bought by Interpublic after we did.”

3 While at Interpublic, Weber helped lead a rollup of smaller PR firms, shaping Weber Shandwick into the firm it is today. He tried to fill holes in the agency’s coverage, both in terms of geography and practice areas. By 2001, he says, the group had acquired more than 25 companies around the world.

“I had my three-dinner rule. I would have dinners with the owners of these agencies. If, after three dinners, we liked each other and saw eye to eye on the future of PR and marketing, I would then send in the lawyers and accountants to acquire those companies.”

4 Weber left Interpublic in 2004. He invested in Racepoint in 2005, became its chief executive, and built it into one of Boston’s biggest PR firms. This led to some awkward moments when he finds himself competing against his old agency, Weber Shandwick. Some potential clients are surprised that he no longer works there. Weber Shandwick’s Boston office is led by Micho Spring.

“I’m very proud of what I built and I’m proud of the office here and what Micho has overseen. They’ve been a good purveyor of my vision. I was the architect, and they’ve been the builders. [But] starting in 2004 and 2005, I really worked hard to build my own brand and my own network. On any given day, we’ll compete against Weber, which is weird.”

5 Being an author helps in a number of ways. Weber interviews clients for his books, helping build their exposure. He interviews potential clients as well. It’s a creative outlet for him. And handing over a hardcover can leave a good impression when he’s trying to drum up business.

“My competitors go in and give a business card. I give a book. Over the years, people enjoyed my books, and it’s helped get us business. The one I’m thinking about right now, it’s called ‘Reinventing Good’ as the working title. [It’s about the] new generation of people saying, ‘We want to make money but we also want to do what’s right for the planet.’ ”